My sincere apologies to those who have been following my blog – this summer was an extremely hectic transition period for me in my life. You can catch up with what I was doing for the first few months at this blog here:

I am currently in Japan looking for work – it is a new type of life for me, but one that has helped me reflect on what I want to do with myself for the rest of my foreseeable future.

The one thing I can say though, is I continue to be blessed with opportunities, most of which I thankfully have been able to take advantage of. Many of those of late have been photo ops, and though mostly pro-bono, have yet again allowed me to do what I love and gain valuable contacts and experiences at the same time.

Case in point, last weekend I shot two days of a basketball tournament being held in Matsusaka, in central Mie Prefecture. I don’t usually shoot indoor sports, but my love for basketball and a request from a friend to take pics of some of her kids and their team (with her! She’s a great shooter as well) was too much to pass up. I thoroughly enjoyed myself, and I’m glad I went back for two days, as the first day was spent mostly figuring out what equipment to use, what angles and positions around the court to best take from, and so forth. Because I don’t like to push my 7D past ISO 1600, I ended up teaming my 5D II with my 70-200 f/2.8 IS L II and my 7D with the 16-35 f/2.8 L II (wider angle lenses by default gather more light than telephoto lenses, which have a much more narrow field of view. This allows me to set my 7D for a reasonable shutter speed even at ISO 1600, though sometimes not enough to stop full motion). Anyone who thinks the 5D isn’t a sports camera just needs to try harder!

It was a really eye-opening experience to shoot elementary school sports – the speed and feel of the game is completely changed, and the size of the players (haha) means that perspectives are wildly different compared to what we might envision, or see in normal media coverage of sporting events. Being low to the ground worked out really well 😀 The second day afforded me a great chance to put my experience from the first few games to use, and it showed, as I almost doubled the number of keepers as compared to the first day! (And that was with only one game vs. two games on the first day). Admittedly, I had a nice crutch – Red Bull 😀 It really does work! I find that it helps me improve my concentration immensely. A can before a game or two and I’m pretty much locked and in the zone (shameless plug? :D). Below are some of my favorite images from the two days. 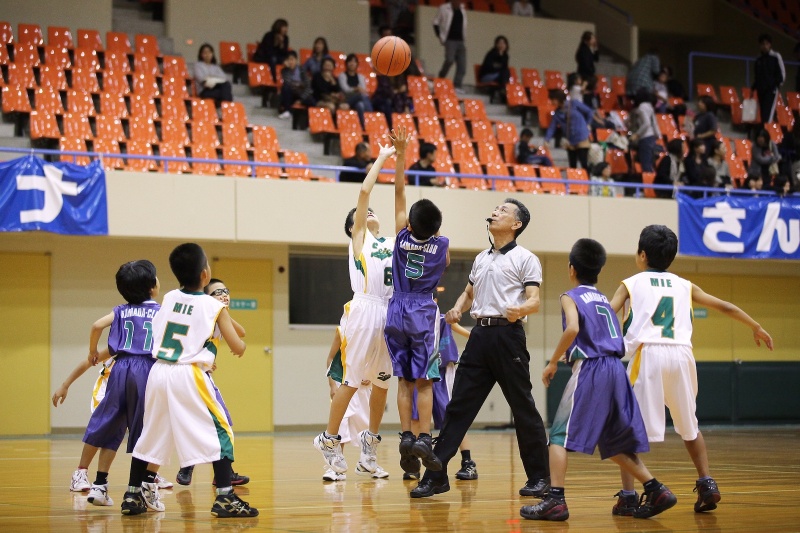 I like telling stories, and what better way to start a game than a jump ball? This shot also shows the razor sharpness of the 70-200 ver. II wide open 😀 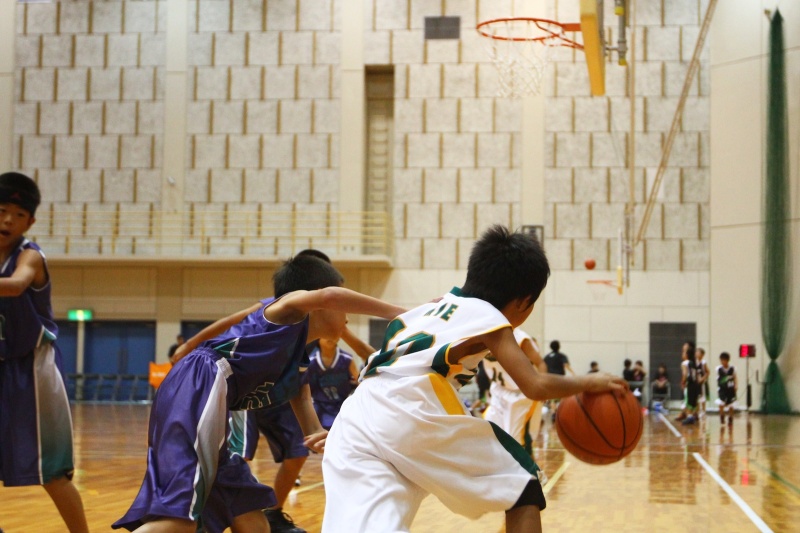 I was sitting on the side close to the baseline when I caught the boy driving to the hoop. I like this picture for two reasons:
I think it shows the level of physicality – even amongst 10 (ish) year olds – and it also shows how high the hoop is for them, even after being lowered!

To me, this shot more represents what a “typical” NBA wide-angle shot might look like, and let’s say replace the shooter with Kobe Bryant,
and the defender with Paul Pierce 😀 If you can get up close, a wide-angle lens often beats a telephoto, hands down!

If you compare this picture to the last one, it becomes apparent how snappy 5D II images are. The FF sensor’s shallow DOF makes the pictures pop, and ISO 2500 is cleaner than 1600 on the 7D to boot! This shot at f/2.0 blurs the back out even more.

This was a typical scene throughout the games – if you forget the play, just clump up around the ball and hope something happens 🙂
Because many teams do not have a developed sense of team movement and play-making, there’s always tons of crowding around the hoop!

In many sports, it’s a photographer’s natural instinct to focus on the offensive players – the slugger cracking one out of the park, the receiver nabbing the touchdown,
the superstar throwing down a slam dunk. However, defense pics can also go a long way to fleshing out the game’s “story” – the intensity of their eyes really says it all.

In basketball terms, we call this “getting your ankles broken, son”. Reminds me of some of Allen Iverson’s sick, sick moves!

As Kenny Smith from Inside the NBA likes to say:
Kenny:  “Hey Chuck, what kind of party do they got goin’ on over there?”
Chuck (Charles Barkley): “It’s a BLOCK party, and Ya’ll invited!!”

The end of a fast break – My friend’s son had come down the entire length of the court and taken his defender all the way to the rim.
Funny thing, most of the time lay-ups actually end up being runners 😀 They’ll grow eventually!

The difference in talent and size in elementary school basketball from one kid to the next is like night and day. Some, who grow faster,
can just jump higher, run faster, and dominate. Others have superior ball handling, or can shoot lights out, even from close to the 3 point line.
Thus, starters (or “sta-men” (starting members) as they are referred to in Japanese), often eat up 70-80 percent of the playing time, simply
because the bench just isn’t good enough. Here, you can see the closeness – and the imitated “playa” attitude – of this group of five.