So I was inspired – or maybe fueled competitively 😀 – by all of Mike’s great posting and realized that I have tons of pics that I have simply neglected to put up. Albeit I’m claiming “studying” is taking too much of my time, but the bottom line is that I have enough time to get them up so I ought not to be lazy about it. Agree?

I had put up one set of pictures from Coal Creek Falls, and then one from the trail I took last month, but I also have taken a load of shots on campus, as I’m at the UW pretty much every day of the week. It’s ironic that as a Seattle native I’m only now finding out how beautiful campus is, especially seasonally. Summer was full of those rich and verdant greens and the pastel and never-ending blue skies that seemed to reach on forever; the sun shining down making patterns on the grass of the quad as students lazed away their time in the shade of the cherry blossom trees. 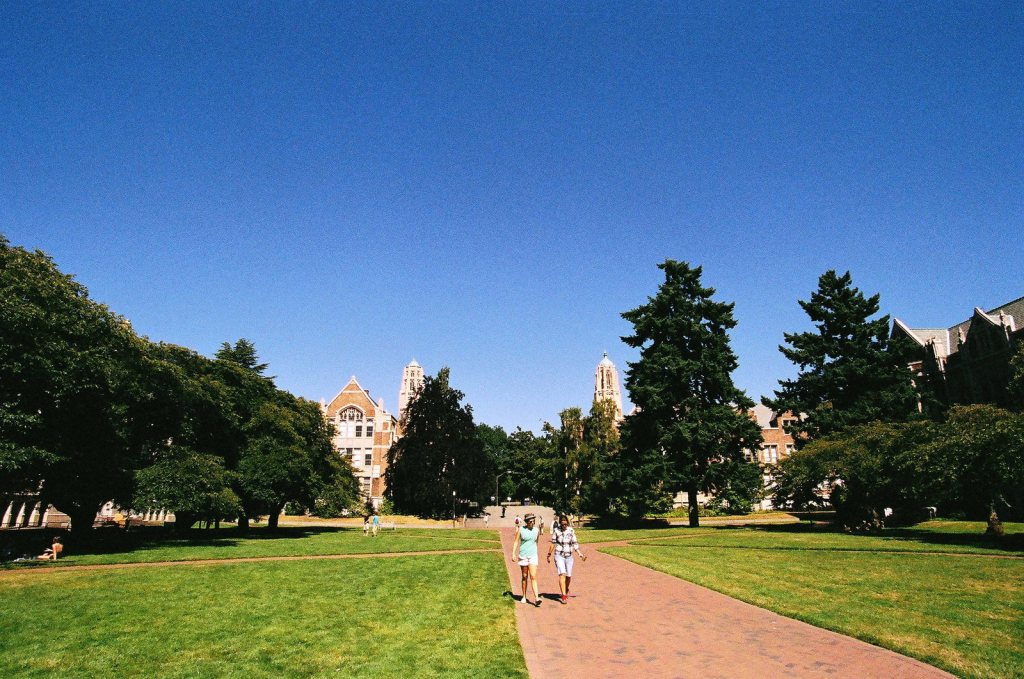 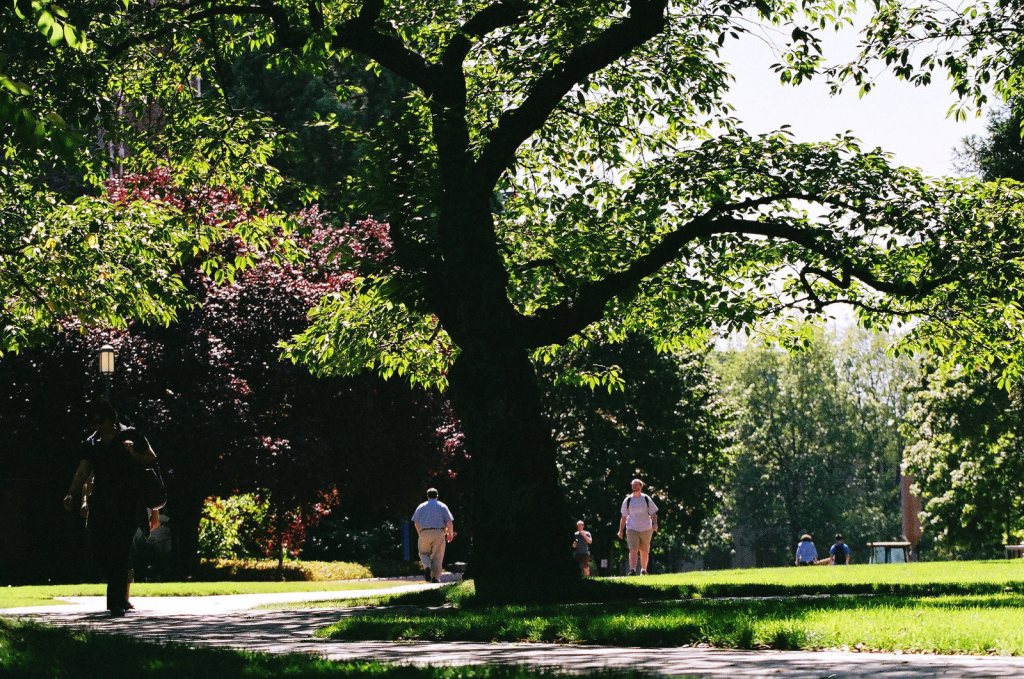 Under the shade of the cherry blossom trees. Kodak Gold 400.

Fall is no exception – I was amazed by how quickly the change came around. Being in Japan for the last four years – where the leaves don’t start turning until November – I was lulled into believing that Washington wouldn’t be any different. I couldn’t have been more wrong! All of a sudden campus became a sea of firey reds and oranges and brilliant yellows, mixed in with the evergreen of the firs and cedars. This year’s October also gave us about a week of gorgeous weather and a return of blue skies and puffy white clouds; like a melting pot of colors, a visual feast for the eyes mixed in with the hubbub of 25,000 new and returning students that marked the start of the new school year. Sights, sounds, scents; it felt like spring, the way campus suddenly burst to life with an energy and electricity that was almost palpable.

A series taken over an amazing TWO DAYS (!) with my Canon Powershot s90 in early September. I don’t recall the last time the light was so good two days in a row:

A splash of purple. 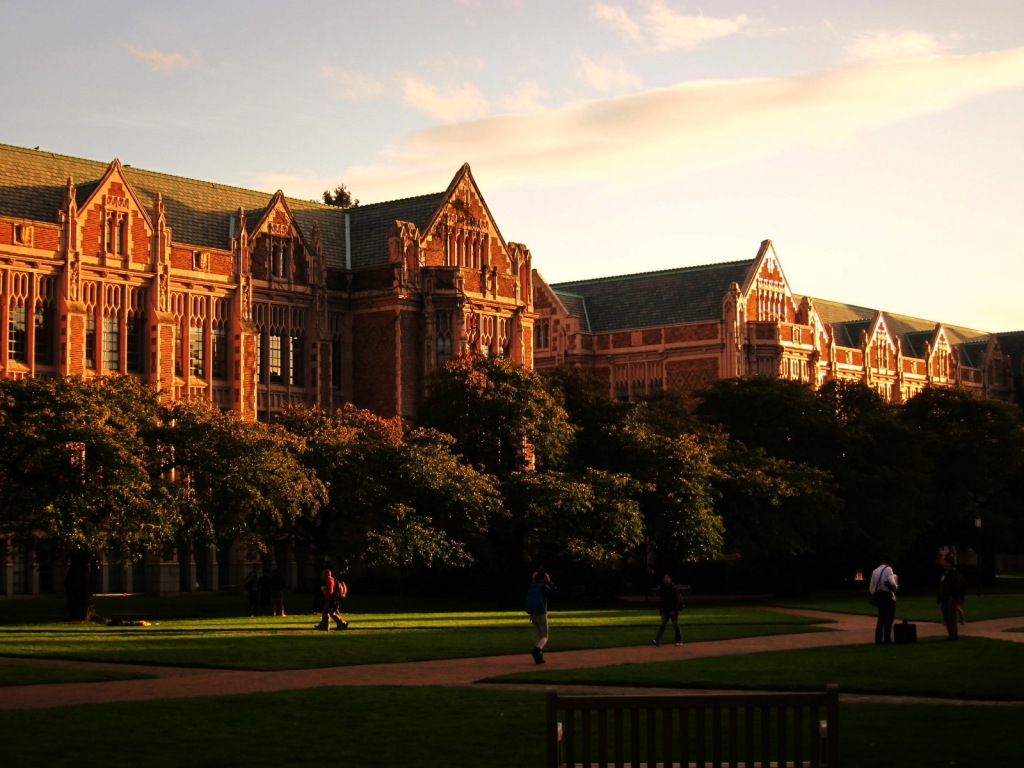 The Quad at sunset.

The Road Not Taken (Think: the Robert Frost poem).

Red square (The Stacks are leaning because I was looking up :D), sunset.

By George (also the name of the cafe under Odegaard Library). George who? George Washington, that's who! Why do you think it's called the University of Washington in Washington State 😉

A sea of red

Towering in the background.

Riding high. Apparently he's pulling tricks in Red Square pretty often. Seemed like a nice guy and was down with me taking some shots! More of him on my Flickr page.

The view from in front of the law building on a clear day.

Framed against a clear sky.

Right around the corner.

The two sides of fall.

Steps to the Quad.

Bikes in the shade.

Enjoying the weather. It took me an inordinately long time to get a shot without people walking through it!

While waiting for the bus (macro).

Heading to class (or studying before hand?).

My favorite kind of pastel blue.

Another sunstar; can't help it, I love taking these shots!

Under the...cherry blossom trees? Yep, the same ones! They change color in the fall, how wild! Must be some kind of mutated genetics?

The Quad and blue skies.

And finally, a few evening shots:

Half moon over the quad at the magic hour.

And that’s all she wrote! Lately we’ve been hit by a big cold snap and got dumped on – 4 inches of snow (Before Thanksgiving?! What is the world coming to???) ! Pics of a snowy campus and our neighborhood will be coming next. For now, enjoy the fall if you’re in Japan, and think back to how great the weather WAS if you’re in Seattle! 🙂